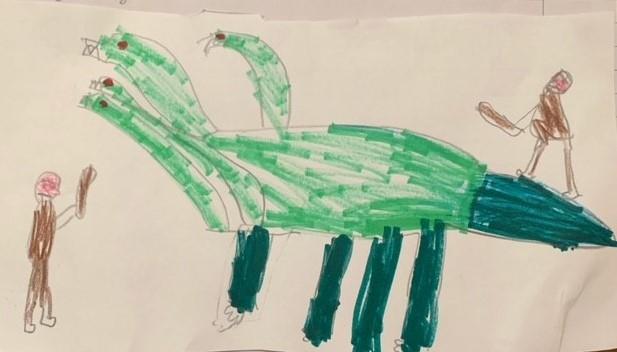 Yesterday I was deeply sleeping when I heard some loud footsteps coming towards my rocky cave. I was furious because I hate intruders lurking around my cosy lair. I poked one of my nine heads to check who was there.

It was Hercules, the lame human warrior, and I saw him coming towards my secret den. Another young man, who looked like his friend, was standing nearby. I glimpsed him with two of my eyes.

At that point my whole body emerged out of the cave and I began to spit my evil venom at him. He looked weak in his pathetic armour, I can’t believe people think he’s the strongest man in the world. What a feeble race!

I fought bravely, of course, but he was stronger than I anticipated. I swung my lengthy tail round to hit him in the face like a mighty tree falling down the floor. Unexpectedly Hercules dodged my tail and managed to chop down one of my heads with his sharp sword. I felt weaker at that moment as it took time for a two new head to grow out of the wound.  Ha!

All of sudden the young man secretly whispered something to Hercules’s ear. I don’t know what he said. Growing angrier and angrier I unleashed my true power by spitting my evil venom twice in all directions.

Just then Hercules jumped on one my heads to chop it off and the young man put my head on fire with a burning tree branch. Soon enough he burnt out all of them. It was as painful as the flames of hell. I didn’t have any more venom and power left. Sadly I had been defeated. But I wasn’t dead: this morning eight of my heads had grown back. I will seek revenge and track him down wherever he is. Even if he becomes a god I shall defeat him!