They say those born of the storm conceal great rage burning within them, as chaotic and careless as the forces that made them. They say those born of dragons have tongues knife sharp, laced with the subtlest of venoms. They say many things about the great Sphinx, created of Typhon’s finest turmoil and Echidna’s vilest venom. Some of these whispered fantasies hold elements of truth, others are merely the ravings of a soul I have shattered at the command of the Gods.

With wings like a soaring eagle, and great golden flesh that gleamed in the eternal Olympus sun, the gods took an interest in me from the start. At first I basked in their warmth, their immortal glory and incomprehensible beauty, until the great azure eyes of our king settled their steely gaze upon my impressive form. Solemnly, he and the gods watched as I grew ever more impressive. One by one, the eternal puppeteer cast his line, ensnaring me in invisible, painless bonds and binding me in lies, half-truths and never-ending praise and attention until it became impossible to break free. By the time I was fully grown, dark oaken hair tumbling to my shoulders, great beast-like form, sleek and shining, I was the plaything of the gods, a puppet dancing on their strings, bound by fear of their unfathomable power.

Occasionally the serene goddess of wisdom would pay me a visit, occupying me with trivial puzzles, riddles, and all manner of mysteries designed to boggle the mind. She knew I wasn’t the savage creature I was perceived to be and found other ways to show she had not forsaken me. These glorious riddles became my only friends in time. I marvelled at how a good riddle can twist the mind, forcing you to come up with solutions outside the parameters of normality, taunting you every second it remained unsolved until a burst of intelligence came charging right at you and you could fathom the answer with a triumphant smirk.

Eventually, there came a time when I longed to rest my clawed feet on the soft, damp ground and drink from the sweet rains down on the earth where I was born. Riling against my captors I began to indulge myself in simple acts of rebellion, severing the strings of Artemis’s favoured bow, gouging deep scratches in the throne of Zeus, spilling torrents of water on the sacred flame of Hestia. Then, all at once, it became too much. Murmurs and rumblings of resentful gods had reached the ears of our King, and he decided to take matters into his own hands.  Mouth twisted into a terrible grin, he described to me, with great pleasure, a large city in Greece, known to those who inhabited it as Thebes. Continuing, he drew out every syllable, infusing them with a venom my mother would have been proud of. He spoke of a crime, vague in its description, committed by the doomed populous of this city long ago and then, then he detailed their punishment. My monstrous blood drained from my face and I began to shake, but before I could comprehend the horror of what I had just been told I was flung from the heavens, the the deep throated laughter of our cruel king fading away as I fell into the sapphire abyss.

The sun gazed down upon the sprawling body of Thebes, embracing the flawless marble abodes and uniform white columns that dominated the Greek city. I sat, stiff as a board atop a great alabaster column, my limbs screaming at me to move, to avoid my fate, but I remained bound by the Gods, doomed to fulfil their every whim. Shaking as he did so, a young man stepped forward to complete his part in this great cosmic game, asking my riddle. I smiled, I had picked what I had considered an easy one, in order to avoid stealing lives, surly these mortals couldn’t be as stupid as to not see what was clearly in front of them, systematically laid out in this most trivial of riddles. Taking a deep breath, I uttered my riddle. “

“What walks on four legs in the morning, two legs at noon, and three legs in the evening?”

I began to relax, confident I would not have to douse my life in tragedy

The man began to shake.

I felt the puppeteers move their cosmic strings, and with that, I ended my first life. 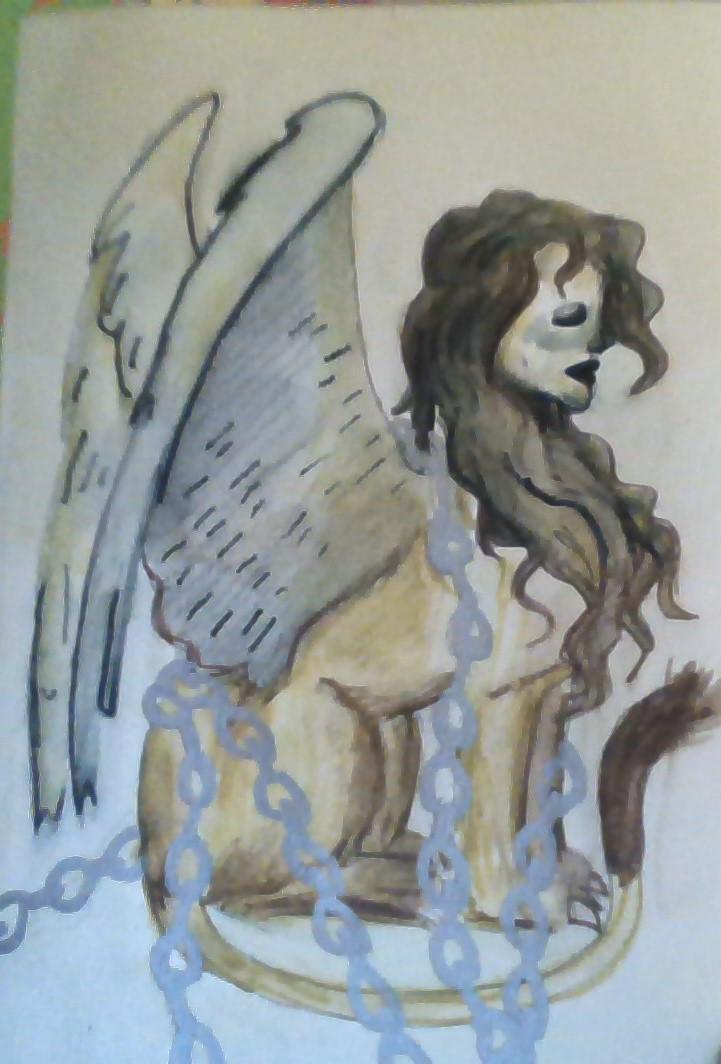